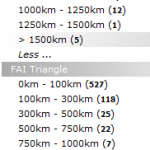 New versions are available for SeeYou for PC, Android and iOS, SeeYou Mobile and Oudie as well as SeeYou Recorder.

SeeYou has received mainly a stability update and a significant change of tools for us. We’ll be very happy if you can give us feedback if it all works fine. The main feature improvement is the “Find My Flight” section in the SeeYou Cloud which enables you to find flights by parameters such as Takeoff place, distance, FAI triangle distance etc. Those you are using the iPad and Android version of SeeYou are already very used to it, now it is availble in the PC version as well. Here’s what’s new in SeeYou

SeeYou Mobile on the other hand has received a significant upgrade in features and usability. See changes log for SeeYou Mobile version 4.50.
. Thermal assistant has been completely redesigned. It can autozoom when you start circling and the visual appearance of the “bubbles” is now fixed and orientated the same as the map which should give you a better impression about where the thermal is stronger and where it is not. The arrow still points into the direction of the supposed thermal core.
. At the top of the Goto page a new ribbon is available where you can quickly navigate back to the Last thermal, Takeoff or Soaring begin (the latter is particularly useful for closing the FAI triangle at the end of the day)
. Mode C/S display of a threat if connected to Power Flarm
. Distance calculation using Ellipsoid (because you don’t want to be 1km short of 1000km!)
. Ability to calculate polar coefficients from within SeeYou Mobile (Settings > Polar) by entering three combinations of speed and sink for your glider
. Several other features introduced in version 4.40 have been improved and optimized according to user feedback during the recent European Championships such as the “Engine on/off” navbox, Closed optimization navbox, ability to enter water ballast in kilograms or libres, support for LX Nav Nano, recalculation of task if it is changed in flight etc.

SeeYou Recorder and SeeYou for iOS and Android can now upload tracks directly to online contest of your choice (onlinecontest.org still pending). XC Globe, XContest and DHV-XC are already supported, more to come.

Not least – all of the logos have been updated. Enjoy the new look and feel of the Naviter software on your devices!