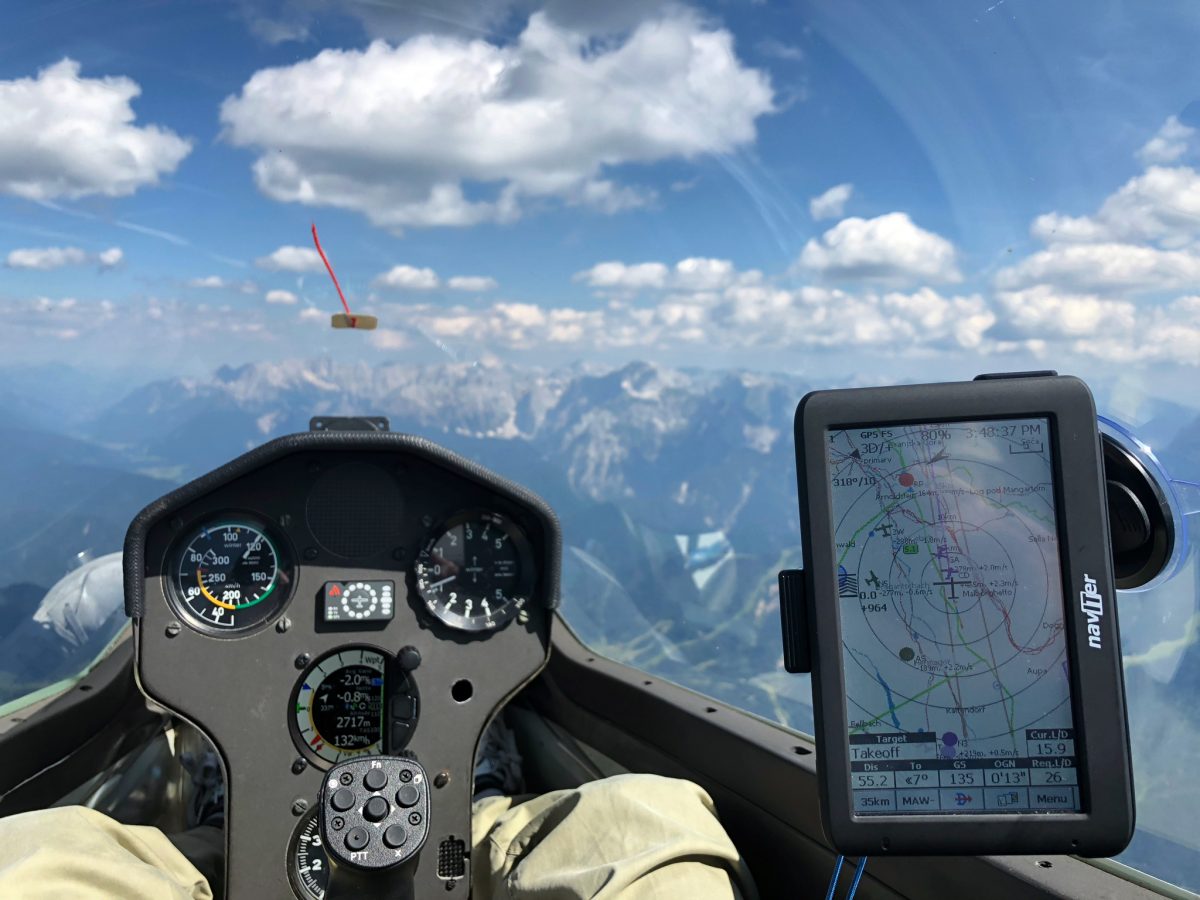 Last week we told you how to see Buddies on your Oudie with help of the Open Glider Network (OGN). This week we put these new features to a real-life test.

Weather forecast was phenomenal. The Alps were promising strong thermals, high cloudbase and no overdevelopment. Sounds like the right day to take inexperienced pilots for their first cross-country flight? That’s what we did! The team consisted of a DG 500 with Luka and Andrej, DG 100 with Iztok and a DG 300 with another Luka, the photographer.

Since we are Naviter we don’t just fly for fun, we test the hell out of our products in the sky.

Morning preparation included:
. Connect Oudie 2 with LXNAV S100 and Flarm in the DG 500
. Connect Oudie IGC in DG 300 to OGN using Oudie Live
. Lend Iztok an Oudie IGC because he’s never flown with a moving map before (it’s his first XC, remember)
. Make sure all systems work
. Study the route we were going to fly on a wall-mounted LCD running SeeYou
. Push gliders to the runway and Go!

It didn’t take long before the instruments were pegged.

While we were climbing in the crazy strong early thermals, Iztok was struggling after release. It was very tempting to ask how he was doing, watching his shadow almost touching trees down in the valley. But since we could see him on our Oudie, we could spare him that radio call. We knew his altitude and we knew that he was climbing steadily with 0.7 m/s. Sure enough – soon his vario jumped to 1.9 m/s on our Oudie. Time to start the adventure!

Meanwhile Luka, the photographer, was on his own in the DG 300. When we asked whether he can see us he replied “No, but I know exactly where you are. I can see you on my Oudie.”

That’s how the whole day played out. Fun and safe. The weather was amazing, we enjoyed ourselves tremendously. Their first cross-country flight ended with 500 km in the optimization navboxes – and this movie as a souvenir:

. All of this functionality is in Oudie since version 8.10
. Your Oudie can also function as a flying OGN receiver, extending OGN coverage in areas without ground antennas?
. All of this works on a paraglider with Oudie 4. It was just more sexy to test it in a sailplane this time 😉